In the Beginning: I purchased a 7-year old gelding (Aidan) in May 2008. Aidan came with “a good start on him”, but had absolutely terrible looking white hooves. They had tons of superficial cracks in them and hi/lo in front. I liked the rest of the horse so much I had absolute conviction those feet could be improved by proper nutrition, trimming and maintenance. Since Aidan was so green and needed a lot of work on the basics, I had the luxury of not demanding much in regards to trail conditioning for about the first year I owned him. He had a completely bootless transition, during which I only rode him in areas with decent footing and only some challenging rocky sections.

He was coming along nicely and after one year his feet had greatly improved; I wish I had taken before and after pictures! And Then There Was Boot Fitting: It was Spring 2009 and I was excited for my gelding’s first endurance season, endeavoring to complete limited distance rides only. Our training was a bit delayed though due to a broken hand in April. Cautionary Note: Aidan does NOT like llamas!!

Fast-forward to late June 2009; our first foray into boot fitting. I have a close friend who has gone through lots of boot trials and tribulations, so I knew I might be in for a bumpy ride. In my estimation, boot fitting is a lot like saddle fitting. There are some lucky folks out there who can just throw on a saddle and ride off merrily into the sunset with nary a sore back. There are others (I think most) that struggle to keep a saddle fitting on a constantly changing back. I think fitting boots is completely analogous; no two hooves are exactly the same (even on the same horse); and they change, especially as a horse is transitioning from shoes to barefoot. I have had my fair share of “fun” with saddle fitting, so I have to admit my “bootless transition” was in part a total avoidance of boot fitting until absolutely necessary. Well, my time had come.

First was selecting what would surely be the perfect boot; there were a lot more choices than there used to be. So my second confession is that I looked at the Easyboot Gloves and thought; INCONCEIVABLE! How could a boot like this POSSIBLY stay on? OR; in order to stay on it will have to be so tight that I will not possibly be able to get it on in the first place. So I went with Easyboot Bares because my friend had good success with them. My first ride with Bares went great, but afterward my horse had sore heels on the low hoof. So I started through a string of experiments with removing the comfort strap and installing tapers, pads of different thicknesses, vetwrap, duct tape, etc, etc.

It seemed like everything I would try would just make things worse, and I was getting discouraged. I went from having a horse well into his barefoot transition that never had sore feet; to a horse I could not ride with or without boots. Every permutation of boot I would try would only make things worse. Of course I was given quite a bit of advice that if I would only slap some shoes on him my troubles would be over and I too could merrily ride into the sunset.

I would patiently listen, smile, nod and then say, “well, I could do that, but I’m going to try just ONE more thing.” Truth be told I was not sure what that one thing would be, but darned if I was going to take a horse that had made the barefoot transition and give up then. So there I was, at “the edge”, not sure what to do. I had another friend who kept insisting Gloves were the answer, but I was not convinced. What other option did I really have though?

Through an unrelated series of events, I started using a new trimmer who really believed in the Gloves. So I just put my full faith in her and had her fit Gloves to his front feet. They were easy to put on and the fit seemed to work great, but there was a dreaded pastern rub. Of course only on one pastern though; that darned low heel foot again! So the permutations of different ideas to stop the rubbing commenced without success. Until I had an epiphany…the gaitors were too tall for him! So figuring I had nothing to lose, I went ahead and took scissors to my gaitors, cutting them down just to the top of the Velcro. It seemed a little nutty, but it actually worked! I still don’t really understand why, but who am I to question a good thing? I eventually fitted rear boots as well, with only one minor issue that was fixed immediately by using the new boots with the reinforced toes.

The Fruits of My Labor: Well, clearly I am ecstatic to have a healthy and sound barefoot horse with boots that fit, and stay on, and don’t rub! As perfectly described by Easycare blogger Kevin Myers, I rode my magic carpet through Moab and all was right with the world. I never looked down once. Well, maybe once…or twice!

Even more important though, every one of us that stays the course with the boot fitting inspires more who really want to, but are fearful or skeptical. I know of two friends who gave up on Easyboots and went back to shoes, who are now going to buy Gloves and give it a whirl again. They took the “I’ll see if she can get this figured out before I try it again” approach. I don’t blame them; and I’m proud to be a positive influence and advocate of Easycare products. Thanks to Garrett, the whole Easycare family, my trimmer, and all my friends who believed in boots and encouraged me to keep trying; I couldn’t have done it without you! 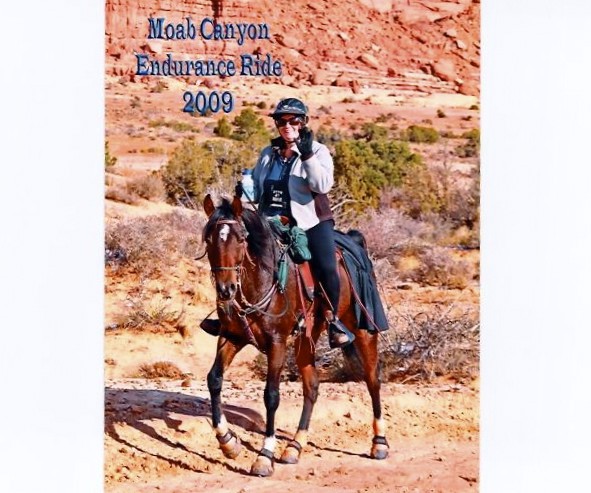