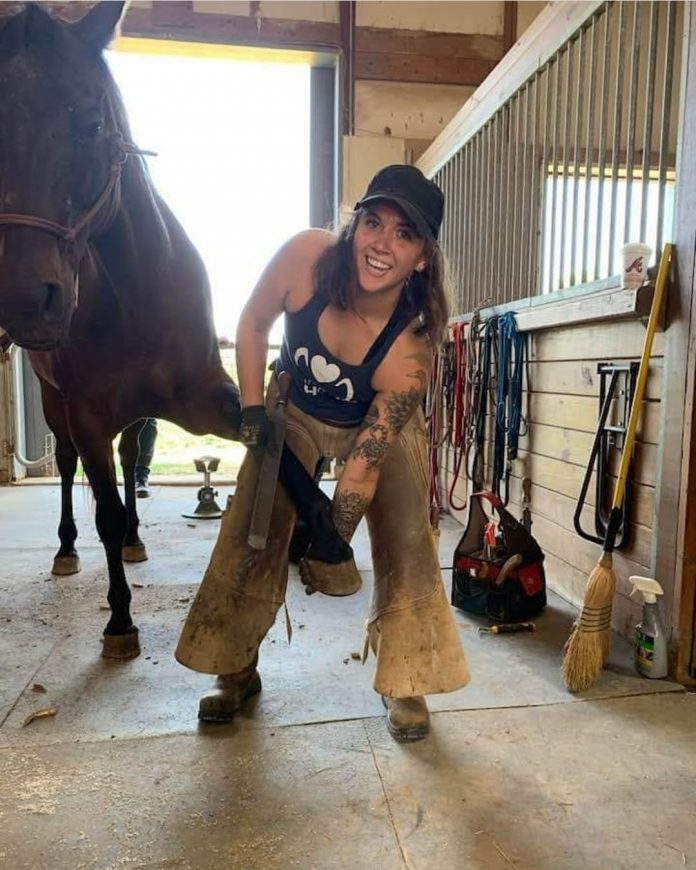 On August 1, 2019, I was called in to work on a very lame Saddlebred. I arrived at the appointment to a very distraught owner and a horse who would only move if forced. The horse was high-low, meaning the angle of the dorsal walls were different. The right front was steep and the left front was shallow. He was in shoes, but the owner explained that he wasn’t holding them well. She was ready to try an alternative.

At that time, I had been playing with EasyCare’s Easyboot Glue-Ons for about nine months. I had already seen that they were significantly helping my rehab cases in that time. I warned her, however, they might not be “pretty,” as I was still refining my technique. She humored me and agreed to an ugly application. I used heat-fitted Easyboot Glue-Ons with EasyShoe Bond Glue, Fast Set. Once the glue had cured, I used Vettec’s Equipak CS to make pour-in pads under his soles. 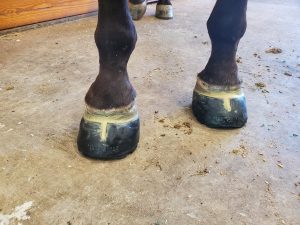 The day after I applied the Glue-Ons, the vet came out to take radiographs, per my request. The horse’s left foot (the low foot) seemed to be the one that was really giving him trouble. The radiographs showed that he had only 5mm of sole depth in that foot. I wanted to keep him on a short trimming cycle during this time, so 27 days later, I came back to remove the Glue-Ons and reapply a fresh set. Before reapplying, the vet took another radiograph and we were all impressed with the results. In 27 days, he had doubled his sole depth from 5mm to 10mm!

I kept the horse on this shoeing regimen for four cycles, until I felt confident that he could be barefoot without lameness. He is now being ridden several times per week. Here are some images of how his hooves changed over the course of those four trimming cycles.

So why did this glue-on package work for this horse? He had been dealing with unresolved metabolic issues that caused deterioration of his laminae, which led to thin soles. Over time, he had developed unhealthy compensatory movements that only intensified his lameness. By addressing his diet, along with providing protection and a comfortable platform to encourage healthy movement, he was able to grow out a much healthier and well-connected hoof capsule that he is now maintaining on his own.

I hope that this blog post encourages those who may be intimidated to try this technique to give it a shot on a horse that may benefit from it. As I hope this illustrates, even ugly applications can still greatly help horses! (And if you want them to be pretty, order a Hoof Buffy from EasyCare!! I love mine and now I never have to apologize to owners about putting ugly shoeing packages on!)

Casey Sexton is the owner of North Georgia Hoof Care in Atlanta, Georgia. She was born into a family of farriers, with both her Mom and brother also being in the business. When she’s not working on rehab cases or maintenance horses, you’ll find her hanging out with her husband and two daughters. For more information, check out www.northgeorgiahoofcare.com.

Eventing in the EasyShoe Versa Grip